LED solar sensor lights are rapidly gaining popularity due to their energy efficiency.

Compared to traditional lighting alternatives, these lights are an affordable option and guarantee consistency.

In this guide, we will walk you through all the critical highlights around LED solar sensor lights.

In the end, we hope you can be able to make well-informed decisions and choices when buying the LED solar sensor lights.

The main parts of LED solar sensor lights include: 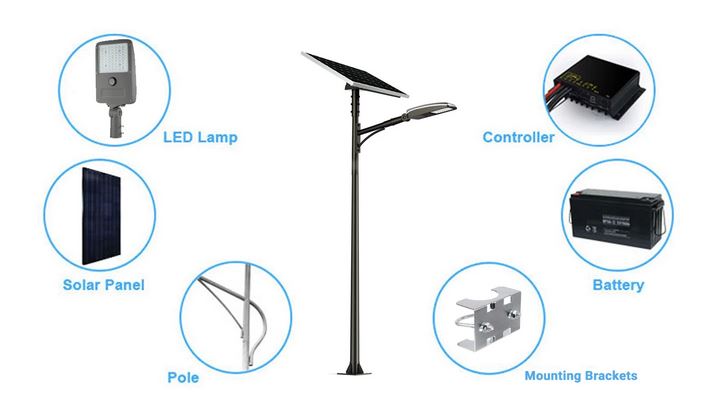 The solar panels are among the exposed parts of a LED solar sensor lights. The panel absorbs the solar energy required to power up the light.

Notably, the panel might be part of the sensor light or maybe detached (stand-alone).

The bulbs are the critical component of the LED solar sensor light since they emit the needed light.

The body or fixture hosts the LED bulbs. They come in various shapes and designs, with the typical body typical of the cobra head used in street lighting.

However, there are alternative bodies to help meet the vast aesthetic and domestic applications.

Sensors or the Energy Management System cause the bulbs to turn on. Usually, they react to a specific trigger. Typically, most LED sensor lights feature either motion or light sensors, or both.

For smaller LED sensor lights, the battery is integrated in the sensor light body. However, the battery may be separate from larger ones and should be kept from cold temperature conditions.

The operating principle of a LED solar sensor light will vary depending on the type of sensor integrated. We will consider the two standard sensor options; motion and light.

During the day, the solar panels recharge the batteries by converting the sunlight energy to electric energy.

With the battery fully charged, the LED light will automatically turn on upon detection of movement.

The typical motion sensors are the PIR (Passive InfraRed) sensors that scan for a moving heat source.

Upon detecting a heat source, for example, a human or a motor vehicle, the light switches on automatically to light up the pathway or the area.

It will remain on provided the heat source is still within the sensor’s scope.

LED solar sensor lights with light sensors function the same as those with motion sensors. However, the sensors, in this case, are responsive to light (photosensors).

Both Light And Motion Sensors

Rarely will you find a LED solar sensor light with a motion sensor lacking a photosensor?

However, coming across a LED solar sensor light with a photosensor without a motion sensor is common.

The two sensors help in energy conservation and efficiency of the LED solar sensor lights.

As earlier mentioned, the operation time for LED solar sensor lights is dependent on the capacity and the state of the battery.

For example, a LED solar sensor light with a 2000 mAH rechargeable lithium-ion battery will operate overnight after a charging period of 8 to 10 hours.

Concerning their lifespan, most LED solar sensor lights have a lifespan of about 50,000 hours. 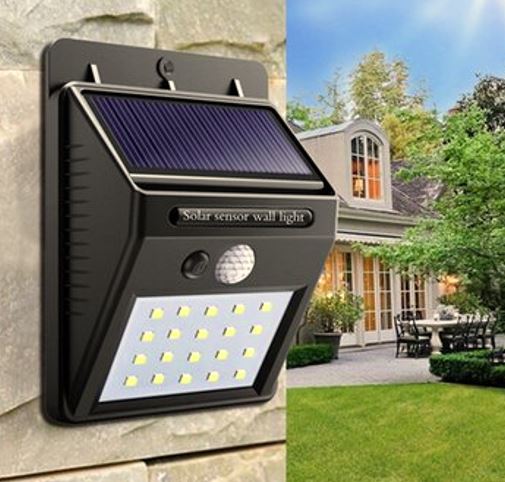 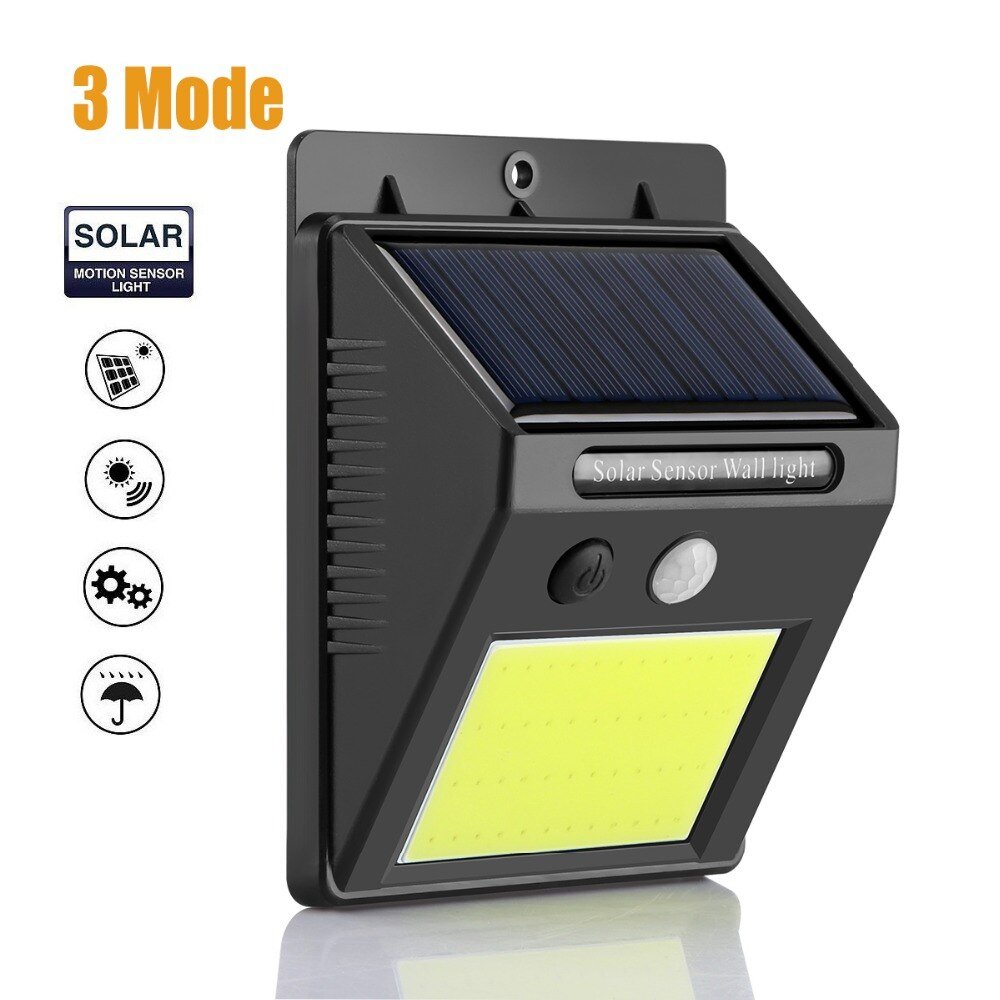 The light modes will differ depending on the type of LED solar sensor light you have. The three standard modes include:

If you have a LED solar motion sensor light with two lights, front, and backlight, they may include the below smart modes.

Mode A – In this mode, both the front and backlights automatically turn on to full brightness if it detects motion within a 6-meter range.

However, as the movement exits the sensor’s range, the brightness of the two lights weakens gradually.

Mode B – Similar to Mode A, both lights will automatically turn on to full brightness upon motion detection.

However, as the movement exits the sensor’s range, the brightness gradually weakens with the backlight going off while the front light remains on.

In most LED solar sensors light, these modes are set by pressing a specified button on the light. 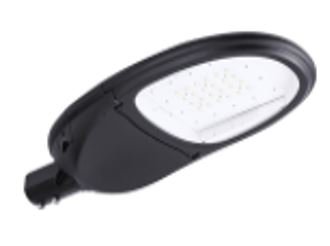 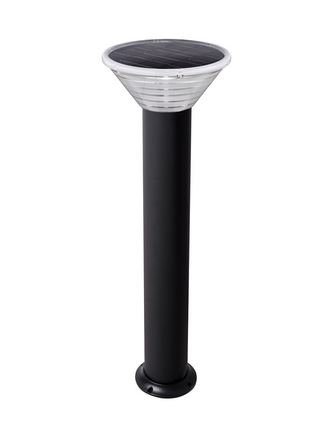 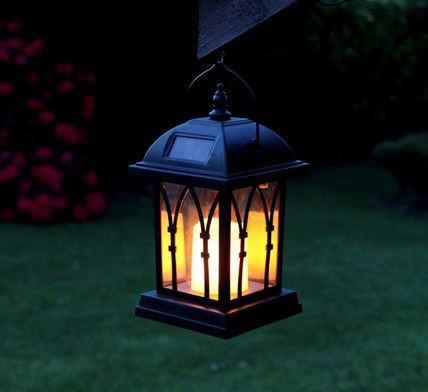 They offer a wide cast of light, illuminating a more comprehensive range. 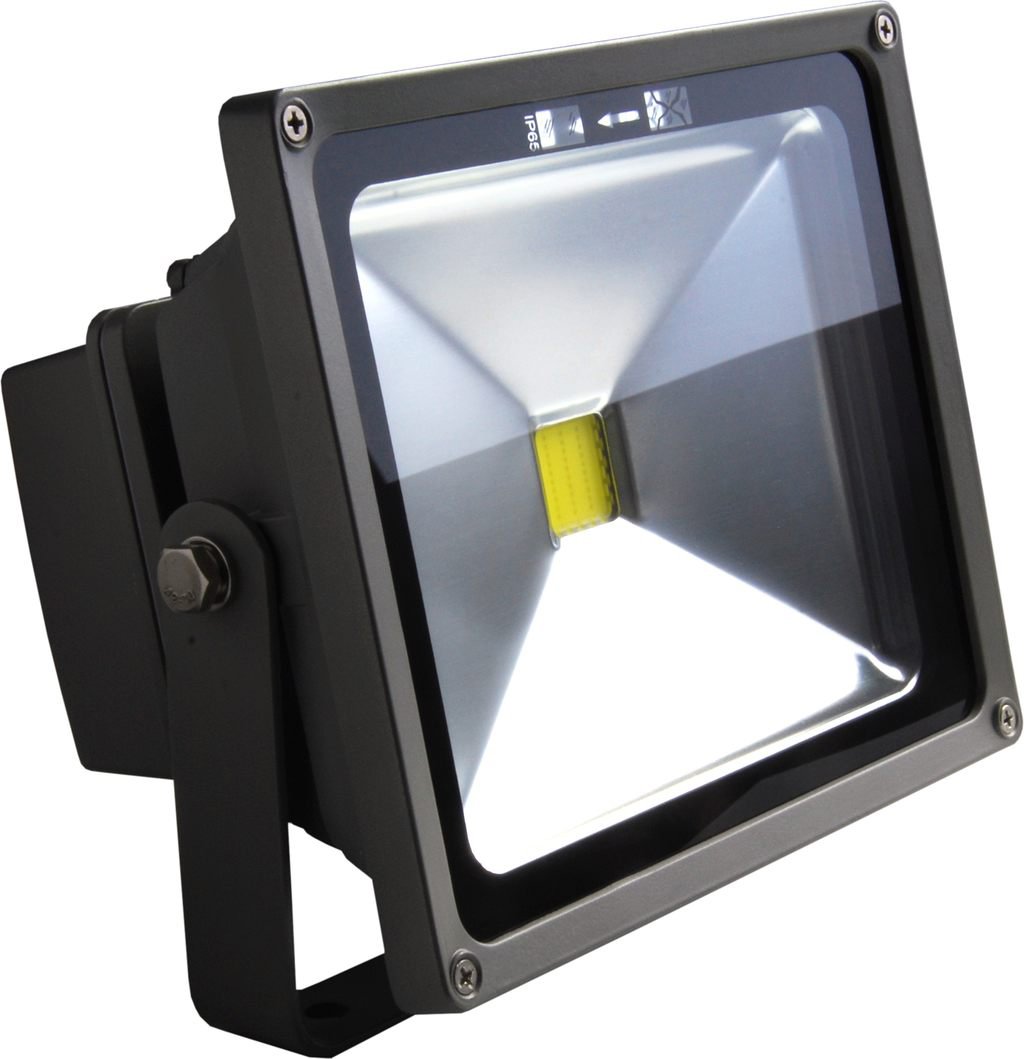 LED solar sensor lights have various advantages that are directly resulting in their rapid popularity. These benefits include:

Sensors are an important component in the LED solar sensor light since they control the powering on and off of the lights. Let’s look at the standard sensors that can be integrated into your lights.

They detect motion and automatically turn on the lights. There are many types of motion sensors, including:

Importantly, there are adjustable PIR sensors that will enable you to adjust the detection range and the delay time. The delay or detection time is the time the lights turn on after motion detection.

These types of sensors respond to the availability or lack of light. Lights with photo sensors automatically turn on when it gets dark or at night. Consequently, these sensors are also referred to as dust to dawn sensors.

They help save on energy since the light will not waste the battery charge by illuminating during the day.

The detection range of the sensors will vary depending on the sophistication of the motion sensor.

Typically, the detection range can be as short as 5 meters to as long as 21 meters.

Types of Solar Panels to Use in LED Sensor Light 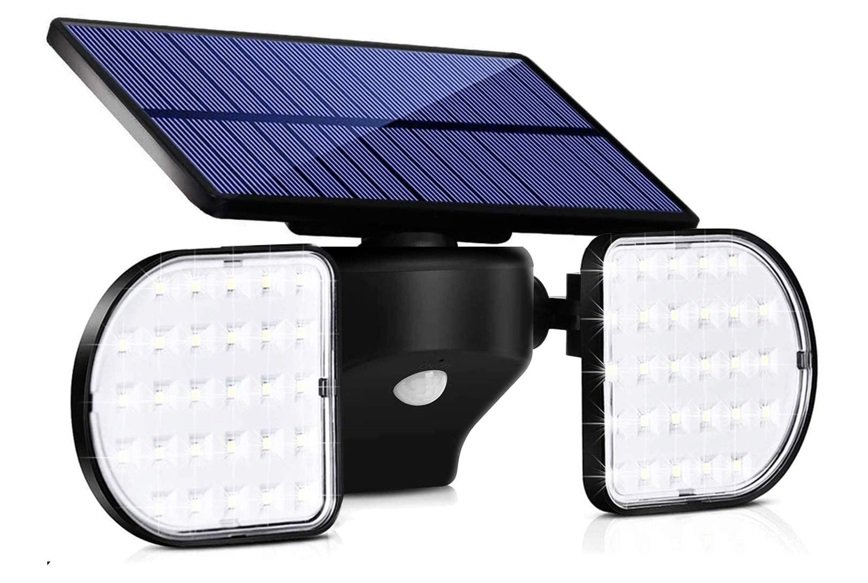 Note: Both monocrystalline and polycrystalline solar panels are ideal for powering large solar lights due to their high cell efficiency.

The color temperature for LEDs is measured in the Kelvin scale within the range of 1,000K (warm color) to 10,000K (blue-white color).

Most LED solar lights have a cool white color temperature, an equivalent of 4000K. However, this temperature can be adjusted to meet your needs. 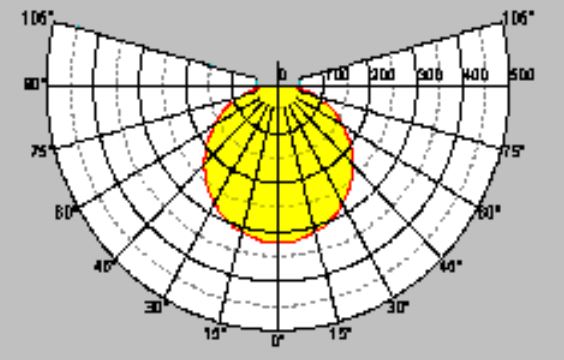 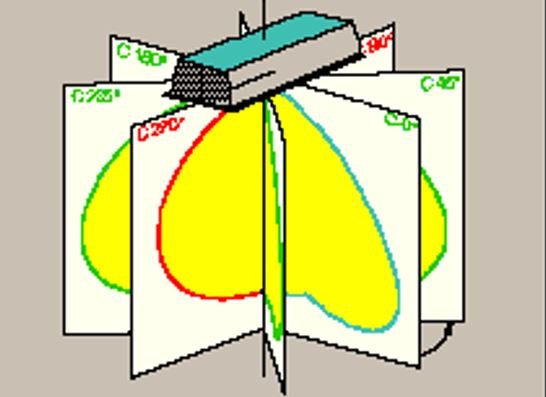 The beam angle shows the angle of distribution of the light from the source. The four (4) categories of beam angles are:

Selecting A Location For Your LED Solar Sensor Light

You can make the below considerations to ensure you install your LED solar sensor light in the best location:

Commonly, you can install LED solar sensor lights in the following locations around your house:
Garden paths

Remember, the installation location will determine the lights’ efficiency in terms of detection and prompt lighting.

The installation of these lights is usually straightforward. The basic steps include;

The battery choice of an LED solar sensor light will directly affect its performance.

Batteries store the power required to power up the light. As such, the higher the battery capacity, the longer the light will operate.

Below are the three major battery options available for LED solar sensor lights.

Arguably, it is the best battery for LED solar sensor lights for the following reasons:

Li-ion batteries are an option for LED solar sensor lights. They are mostly found in small electronic devices such as cell phones. However, they are not preferred in solar lights due to the following reasons:

NiCd batteries are also a possible alternative. But, similar to Li-Ion, they have some shortcomings, which include:

Lastly, we have the Nickel Metal-Hydride batteries. Although NiMH batteries are a better option than NiCd batteries, they have similarities, such as a full charge requirement. Also, they require a ton of maintenance.

NiCd and NiMH are cheap, lightweight, and ideal for low-power LED solar sensor lights. They are available in two main sizes, AAA and AA.

Li-Ion and lead-acid batteries are ideal for high-power LED solar sensor lights. They both require less maintenance and have a long life span.

Most LED solar sensor lights have a charging time of between 6 to 8 hours, an equivalent of full daylight time. After which, they can operate for 8 to 12 hours.

The Energy Management System (EMS) can be termed ‘the brain of the LED solar sensor light’. It ensures efficient power storage in the battery and timely discharge of power if the sensor light needs it.

Conclusively, the EMS controls the power in the solar light. It comprises the driver and the controller. Below is a detailed description of both 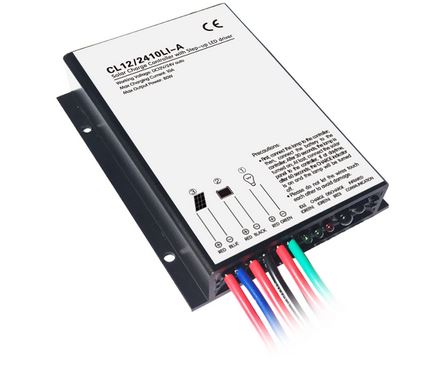 Primarily the controllers energize the LEDs in various modes. The modes can include;

Also, the controllers instruct the drivers on how to alter the light level.

The drivers convert the raw voltage (commonly, DC 12volts) to 85 volts for use by the solar light.

The motion sensors in the LED solar sensor lights have a scope of ranges. Usually, the range is within 1800 to 2700. In terms of distance, the range can be between 16 feet to 65 feet.

Your selection of a specific sensor range will depend on how far you want the sensors to detect.

Factors To Consider When Purchasing An LED Solar Sensor Light

You should not be all green when going to purchase an LED solar sensor light. For this reason, here are some key factors that we recommend you consider;

There are several aspects that will enable you to get the right LED solar sensor light, including; 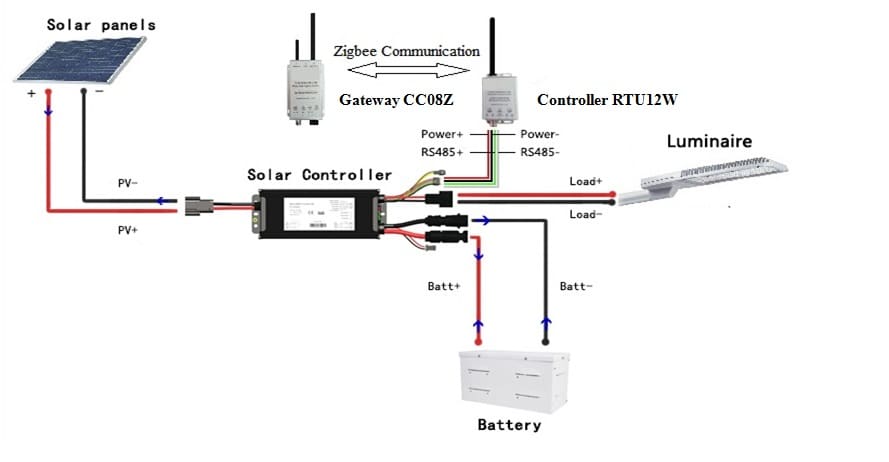 Similar to other electronic devices, you will need to replace the batteries of LED solar lights after extended usage.

For LED solar sensor light with replaceable batteries, the replacement should be after 800 charges, roughly 12months.

Here’s how you can simply carry out the replacement:

You can do the following;

If your solar light happens to experience certain problems, you can check the table below for possible explanations and solutions.

Also, there are general solutions you can directly consider when you are experiencing problems with your solar light. These include;

The above-listed solutions are those you can carry out by yourself. However, if there is no change after implementing them or after letting the panel charge for two(2) days, you can reach out to us for further assistance.

Safety first! You should make the below considerations to ensure that you and every user plus the solar light are safe.

Most LED solar sensor lights come with limited warranties, usually lasting a year after the date of purchase. Notably, you need to provide proof of purchase before claiming the warranty.

Here are more related sources of information you may need:

For any questions or inquiries on LED solar sensor lights, contact GoldMore now. 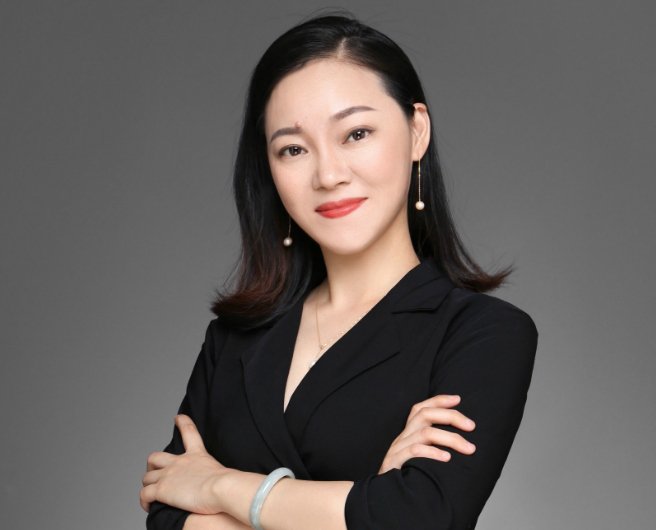 Hey, I am Ixchel. Founder of Goldmore.
We will always be your best partner for outdoor lighting development.Reach me at sales@goldmore.com to get a quote for your next light design
Contact Our Support Team
Scroll to Top